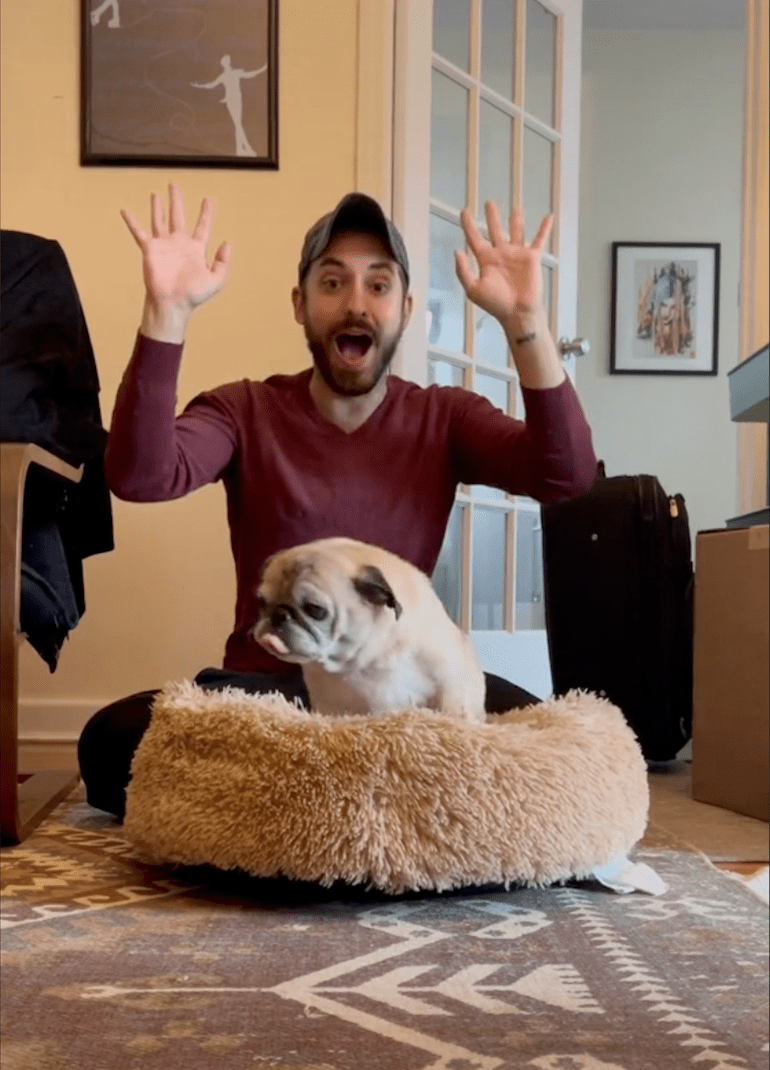 If you’ve been on TikTok or just in the social media sphere in general recently, then you’ve probably heard about Noodle the pug and the phenomenon of “bones” and “no bones” days that he has sparked. If you haven’t, the premise of the videos is this: Noodle, a 13-year-old pug, begins each video laying down in his bed, either still asleep or having clearly just woken up. His owner, Jonathan Graziano, pets the dog to wake him up as a voiceover welcomes the audience back to “another round of no bones, the game where we find out if my 13-year-old pug woke up with bones, and as a result, we find out what kind of day we’re going to have.” Graziano picks Noodle up and attempts to sit him upright on the bed, and Noodle either stays sitting up or flops to lay back down, proclaiming it either a bones or no bones day respectively.

On bones days when Noodle stands on his own, Graziano encourages the viewers to attack their day with energy, treat themselves and go after the things they want that they’ve been putting off. Finally starting that big project, asking for a raise, trying that new sushi place down the street, these are all things that are recommended on a bones day. If Noodle flops, the idea is to take a gentler approach– let yourself stay in bed that extra five minutes, enjoy something comforting for dinner, and generally don’t push yourself too much. Graziano is always quick to point out in his voiceovers that no bones days are not a bad thing, nor do they foretell a difficult day. Bones and no bones is less a prediction of what the day will be like and more a suggestion on how to approach it. No bones days often include the suggestion to avoid “hard pants,” i.e. jeans or any other uncomfortable clothing, and not take any big risks.

Graziano, who goes under the handle @jongraz on TikTok, and his 4.3 million followers rely on Noodle as a sort of cross between Groundhog Day and a daily horoscope. The general tone of the videos and the community they’ve inspired is lighthearted and fun, not taking the pug’s verdict too seriously, but also enjoying a little bit of a push to either face the day with energy and drive or to be a bit more mellow. Noodle and his bones have inspired comedy, music, and more from people on TikTok and other platforms as well.

So what’s the point of all this? Why has a floppy pug become so incredibly popular? Aside from the cuteness factor, Noodle has been providing something that a lot of people need very badly: an external source of encouragement. With so many people of all ages and backgrounds facing high amounts of stress and struggling with their mental health, it’s common to find it difficult to give yourself the push required to really tackle the day, and it’s equally hard to be kind to yourself and prioritize self care. Lots of people end up stuck in a state of being unable to allow themselves to rest and recover but also being too stressed and anxious to do things that will help them succeed. It becomes a vicious cycle, and sometimes a helping hand is the thing required to break out of it. With his adorably stuck-out tongue and limp drops, Noodle has become that helping hand, giving people the encouragement they need to either be proactive or to take care of their own needs.

The split between bones and no bones days is nearly 50/50. The factors leading to Noodle’s flops are not completely random, with Graziano often accurately predicting his dog’s reaction to being picked up based on things like the weather (Noodle hates rain) or the previous day being tiring. However, though it might be unintentional, the even split of results also has a lesson embedded in it: the importance of balance. Constant productivity with no time to relax is not sustainable. Eventually everyone will burn out under that kind of pressure. Conversely, if you never take the initiative and get out there, you’ll never achieve any of the things that you want. True well-being and contentment requires both effort and rest in fairly equal parts.

If you hear about it without context, the concept of the no bones game can seem a little out of left field, but Noodle and Graziano’s popularity and positive response are as good an indication as any that no bones is exactly what a lot of people need right now. Whether you’ve already been inspired by the pug or you’re still a skeptic, try to keep it in mind that Noodle has the right idea! When you’re feeling tired and low, it’s okay to flop, but when the time comes, get those legs under you and stand for yourself.