How To Break Bad Habits and Truly Start Living 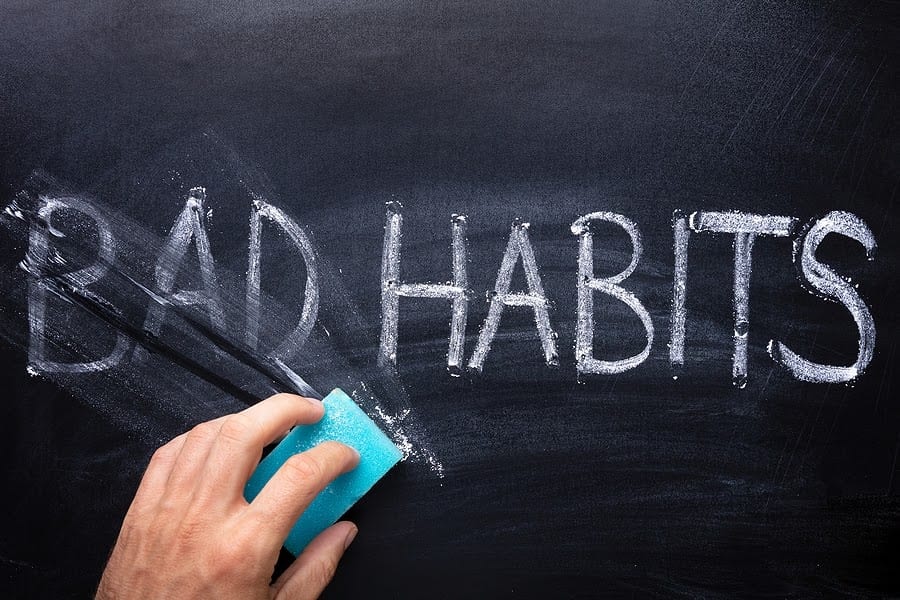 Is there anything more human than our attraction to familiarity and routine? For many of us, habits can be a good thing.

Take driving to work for example. After some repetition, you no longer half wonder where you should turn or which exit to take, because taking that route has become habitual. This is the same argument that many people have when it comes to healthy eating and exercise. After a while, you get used to it.

However, for every good habit, there is an equal amount of bad habits. Take eating fast food, biting your nails, or vices like smoking for example.

While many bad habits can vary in terms of severity and level of concern, the reality is that all bad habits can have the potential to lead us astray and begin affecting our lives on a larger scale.

When you begin to notice that your bad habits may be negatively impacting your quality of life and mental health, that is the time to focus your energy on breaking them. This can be a challenge, but it isn’t impossible.

How a Habit is Formed

Everyone has habits. Some may be better than others, but most experts agree that nearly all habits are formed in a similar way. Over time, habits can be hard to break; especially when our brains find them pleasurable.

There are many theories of how habits develop in our brains, but the most famous theory is the concept of the “3 Rs.” This theory is described as follows:

Why Are Habits So Hard to Change?

Depending on the person and the habit itself, it can become extremely difficult to kick negative behaviors. This is not always indicative of a lack of willpower or desire, as sometimes elements like physical dependency and symptoms of mental health issues can make breaking bad habits significantly more challenging.

Dr. Russell Poldrack, a neurobiologist at the University of Texas at Austin, had this to say regarding dopamine’s effect on human behavior:

“If you do something over and over, and dopamine is there when you’re doing it, that strengthens the habit even more. When you’re not doing those things, dopamine creates the craving to do it again. This explains why some people crave drugs, even if the drug no longer makes them feel particularly good once they take it.”

As Dr. Poldrack says, the reason bad habits can be so hard to kick is because we’ve spoiled our brains into actively working against us.

That said, the good news is that humans are not merely creatures of habit, and we have many more brain regions that can help us get back on track and start doing the right thing for our health and mental wellness.

The Secrets to Kicking Bad Habits

Since habits can take practice and repetition to form, the same is true when it comes time to break them.

Since your brain has become accustomed to the dopamine release associated with your negative habits, this can be a challenge, but never underestimate the power of properly guided will and positivity!

Here are some great strategies to use when you’re looking to eliminate those stubborn bad habits:

Many habits, like smoking or excessive sugar consumption, are chemically engineered to be extremely effective at stimulating our brains to release dopamine.

Back in the early days of human evolution, it was rare to find such stimulants, but modern access to science and industrial ambition has completely oversaturated the market in recent times.

“Our brains aren’t well-equipped to deal with the big rush one gets from these sorts of things,” Dr. Poldrack says. As a result, the frontal lobe, the brain’s “control center,” can become overwhelmed.

“You’re more likely to do the thing you don’t want to do when you’re stressed out,” Poldrack says.

This only makes sense, seeing as how a lack of dopamine or the over-activity of brain areas like the amygdala and the thalamus can make us seek out immediate relief.

Luckily, there is evidence that certain behaviors, like regular sleep, regular exercise, and stress-reduction techniques like meditation can all work to reduce these effects and increase willpower and overall brain health.

As we discussed earlier, cues or “reminders” as we called them, are usually the first step in acting out any habitual sequence. Recognizing and identifying your cues can help you avoid them.

Elliot Berkman, director of the University of Oregon’s Social and Affective Neuroscience Lab, suggests that disposing of familiar objects associated with the habit you are trying to break can help you break the routine.

If you’re a smoker, try throwing away your ashtrays or lighters. If you’re trying to cut back on drinking, avoid walking by your favorite bar while out for a stroll. Even minor shifts in lifestyle can serve as the ideal opportunity for eliminating a vice.

Replace Bad Habits with Good Ones

It may seem overwhelming and even impossible to stop a familiar behavior, but what about starting a new one?

If you’re a smoker and you begin to crave a cigarette, try alleviating that feeling with a stick of gum instead. Similarly, if the strike of 5 p.m. has coincided with an alcoholic beverage for years, try using it as a time to double down on hydration instead. Keep your fridge stocked with seltzers, cold water, and lemon, says Berkman.

While replacing habits can be effective, forming a new one can take time and commitment, so don’t get discouraged if it’s taking longer than you expected to achieve your ultimate goals!

At Lehigh Center for Clinical Research, we strive to improve the health and well-being of all of our patients, and that’s why we work each and everyday to better understand how humans work.

A big part of what we do involves creating and managing studies that can help us better understand, and work towards the treatment of, a variety of psychological disorders. To learn more about what we do first hand, don’t hesitate to contact us at your earliest convenience!

What is Stress? Breaking It Down For National Stress Awareness Month
April 27, 2021